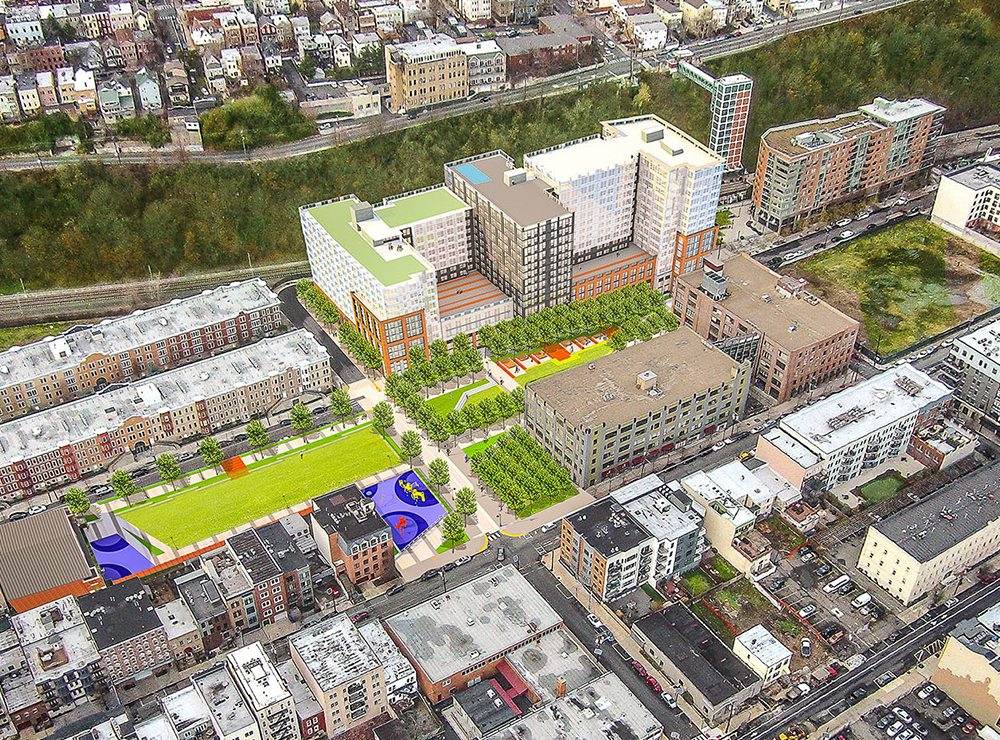 700 Jackson Street Redevelopment and Resiliency Park is a mixed-use development in the City of Hoboken. The project is a public-private partnership led by local developer Bijou Properties and its partner, Intercontinental Real Estate. The redevelopment is part of a larger effort by the City to manage flooding and build resiliency through large-scale stormwater management. The site contains a public park and plaza, a public gymnasium, 424 apartment units, a parking garage, and 30,000 square feet of retail space. Perhaps most impressive is the approximately 450,000 gallons of stormwater storage that will reduce localized flooding.

In 2013, the City of Hoboken developed a Green Infrastructure Strategic Plan which identified this site as a potential resiliency park to retain stormwater. Concurrently, the United States Department of Housing and Urban Development (HUD) initiated the “Rebuild by Design” (RBD) competition as a tool for funding resiliency strategies in the aftermath of Hurricane Sandy. The RBD competition developed a comprehensive water management strategy for Hoboken consisting of four integrated components: resist, delay, store, and discharge. HUD awarded the State of New Jersey $230 million to construct the resist component, which will reduce coastal flooding. The City and partners are working to implement the delay, store, discharge components which will reduce rainfall flooding. The 700 Jackson site, already identified as a potential redevelopment site by the City, became part of the City’s efforts to delay and store rainwater as a resiliency park.

As part of the development agreement, the developer designed and built a public component for the project which includes a 6,835-square-foot gymnasium, public open space, and an underground stormwater detention system. The public gymnasium, public open space, and stormwater system components of the project were completed early in the construction of the overall mixed-use development; ownership of those spaces has been turned over to the City. As part of the redevelopment design for this site, the City and developer prioritized the public space. This strategy resulted in the consolidation of development from the entire site to approximately one-third of the site through increased building height. The remaining two-thirds of the site served as area for the public space amenities.

The project exemplifies how to design a complex site within challenging urban conditions while providing stormwater management beyond previous state requirements.

View of 770 House and adjacent park during construction. The park provides added value to the mixed-use building
as well as stormwater storage. Image Credit: Bijou Properties, 2020

The design of the 700 Jackson site evolved over time to maximize flood control and meet the City’s water management goals of delay, store, and discharge. The existing parcels consisted of entirely impervious surfaces. Through the creation of green space and reduction of existing impervious surface alone, the design would have been exempt from state water quality standards. However, working with the City and the North Hudson Sewerage Authority (NHSA), the design team went above and beyond requirements to provide additional treatment in the form of green roofs and an underground stormwater detention system.

The selection of the stormwater system was primarily dictated by the realities of physical constraints on the site, specifically the shallow depth to groundwater and poor infiltration capacity associated with that condition. Stormwater design measures that were considered include a more dispersed storage approach and infiltration features. However, these alternatives were determined to be infeasible due to the shallow depth to groundwater.

Maintenance was another factor in the decision-making process. Because the stormwater detention system is located on the public parcel, there were concerns over debris and trash clogging surface systems.

The site’s urban context presented a number of challenges for the design team. The majority of Hoboken has shallow depth to groundwater, numerous existing utilities, and intensive pedestrian and vehicular traffic. These constraints guided design decisions and offer learning opportunities for developers working under similar conditions.

The design team kept maintenance in mind throughout the design process. With the knowledge that the public portion of the project would be handed off to the City, access to the system and maintenance procedures were kept simple.

Maintenance for the underground system will be performed by the North Hudson Sewerage Authority through an interlocal agreement with the City. Hoboken’s strategy for maintaining green infrastructure and flood control throughout the City is evolving with the increase in systems. Hoboken recently hired a landscape contractor to maintain all City-owned vegetated green infrastructure BMPs. 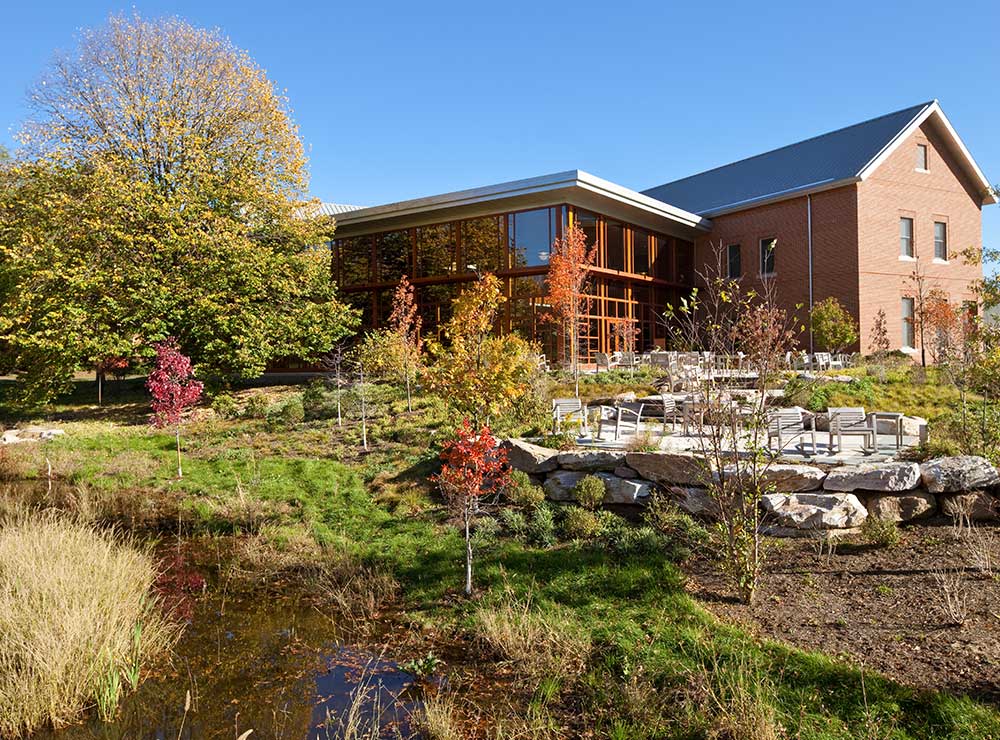 Before vs. After the Rule Change

Learn How Project Design is Affected by the Rule Change 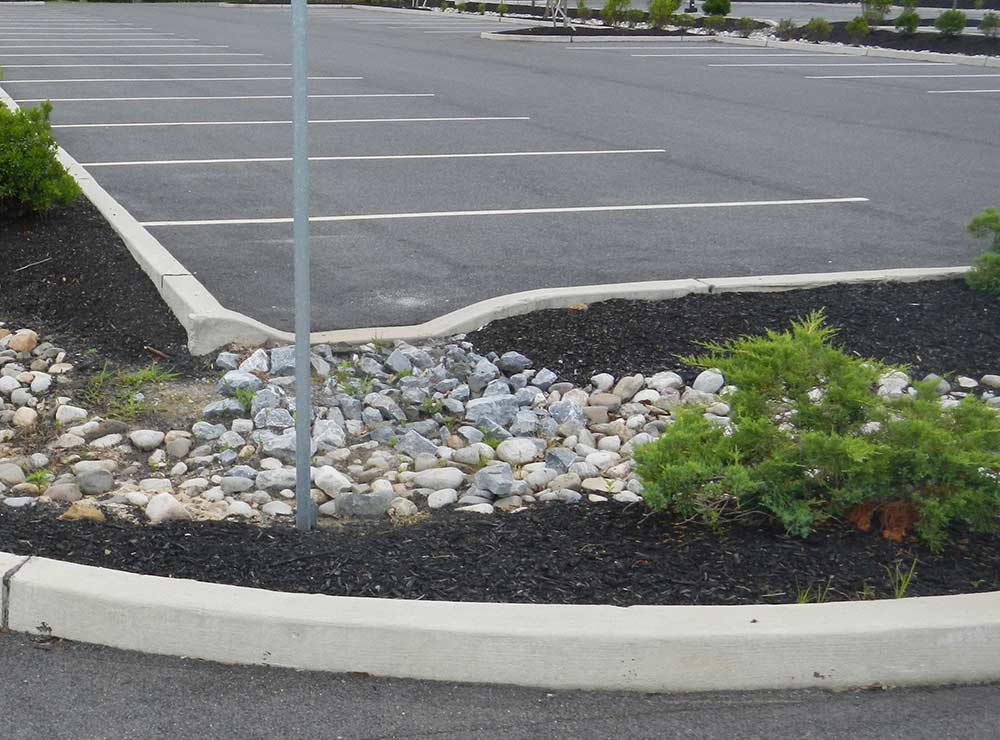 Need Help Deciding Which Types of Green Infrastructure are Right for Your Project? 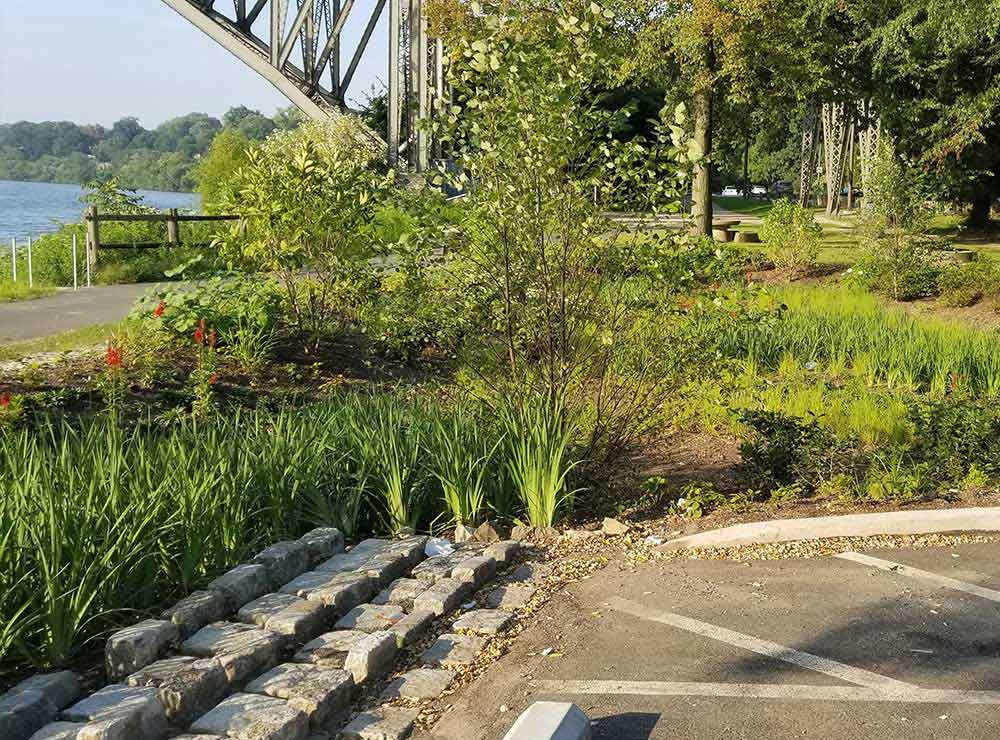 Options and Strategies For Tough Sites and Annoying Situations 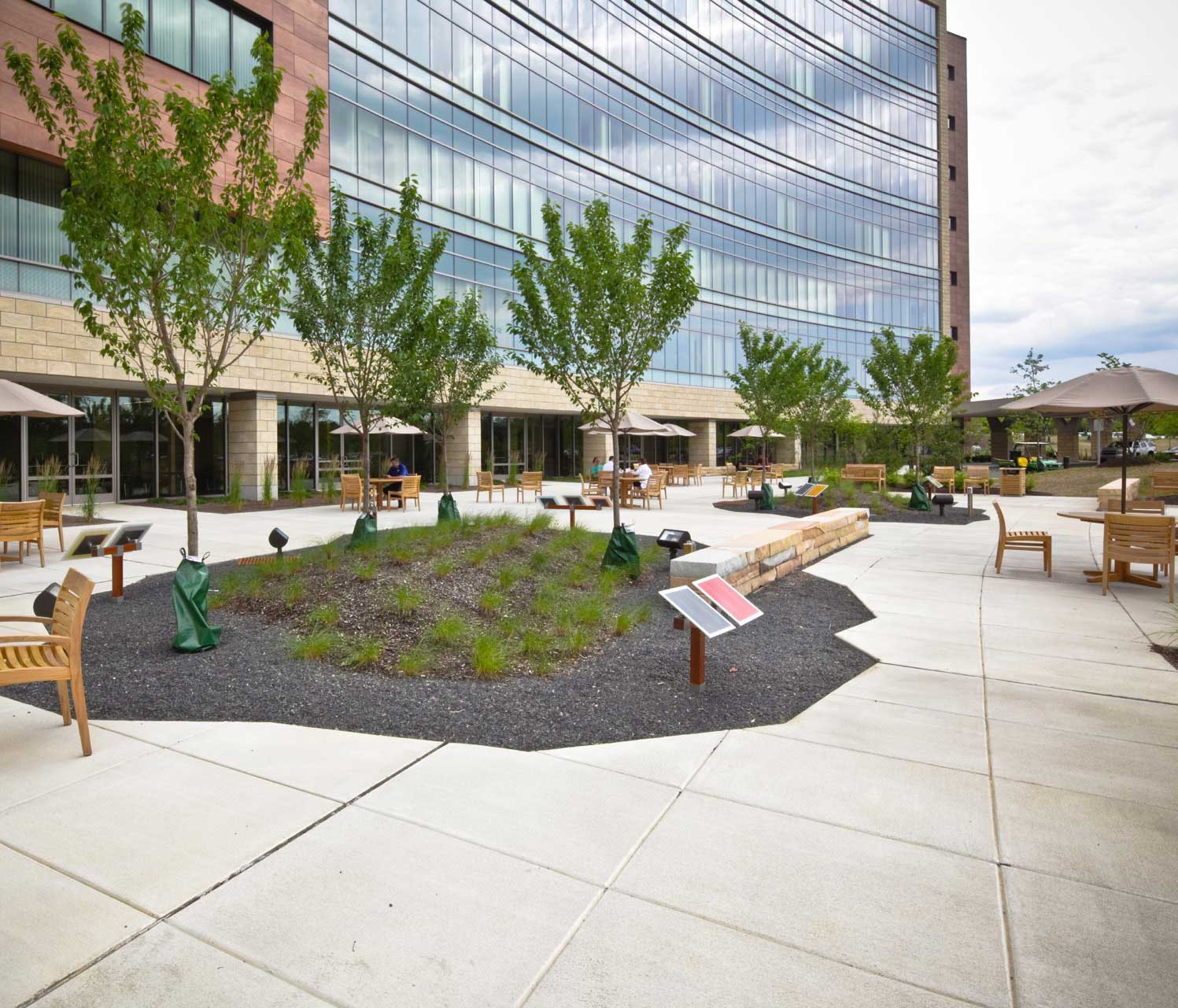 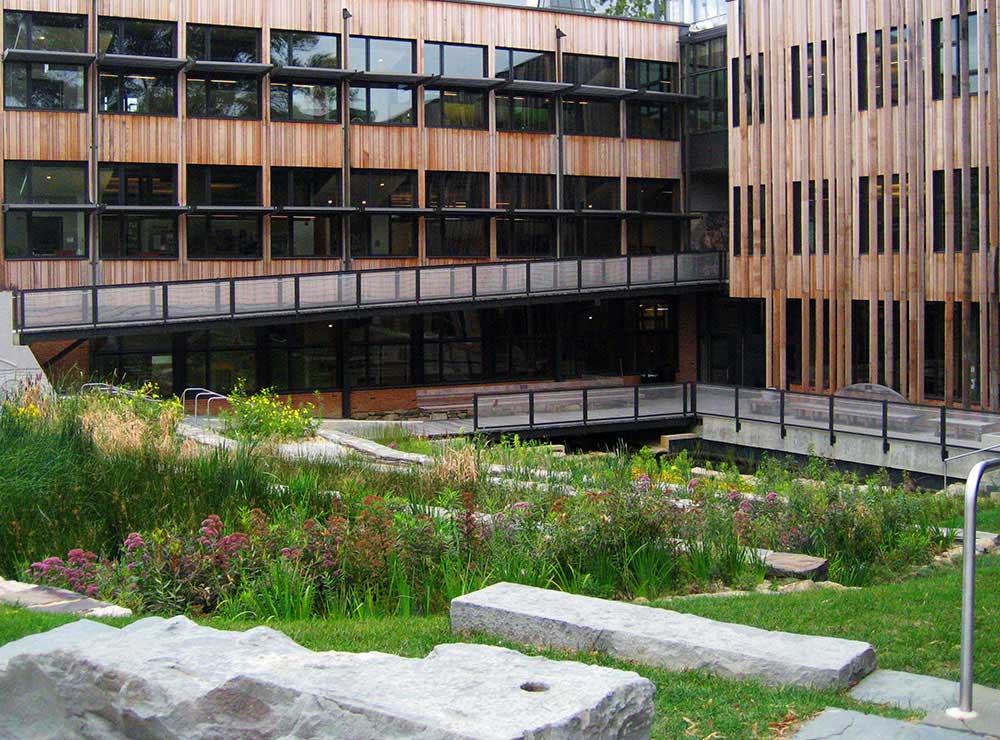 Learn the Financial, Community, and Environmental Benefits Under the New Rule 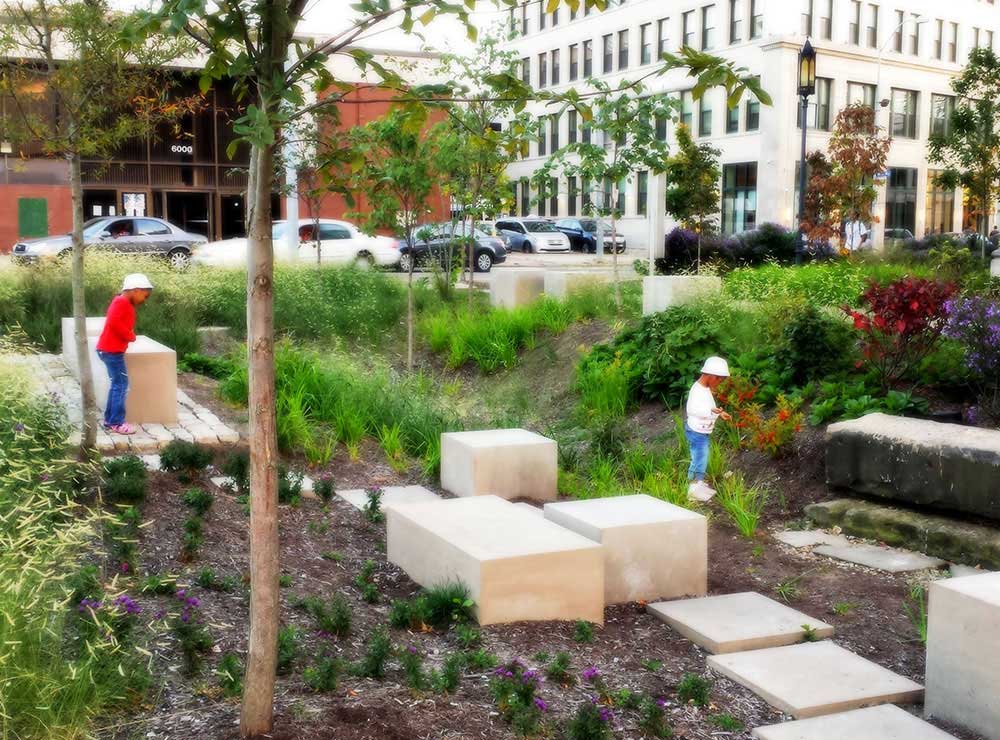 Get the Facts: Clear, Simple, and Sometimes Surprising